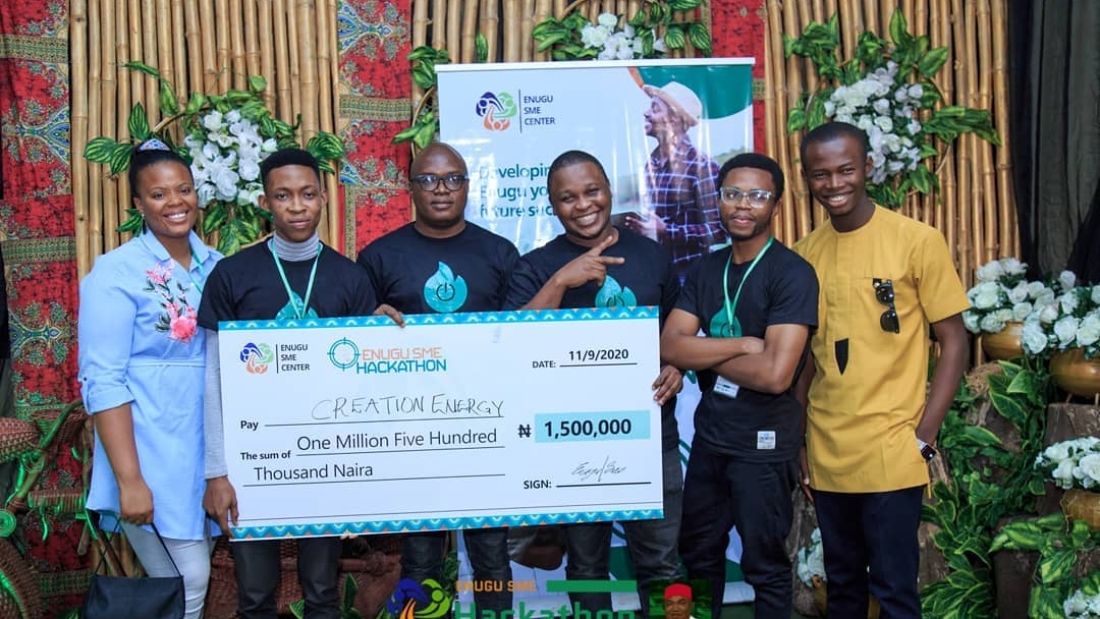 Creation Energy, winner of the first edition of the series, being presented with their prize by Obi Kama, commissioner for Science & Tech (far left) and Arinze Chilo-Offiah, special adviser, SME Development & Investment Promotion/ head, Enugu SME Centre, at the finals of the challenge in Enugu recently.

The Enugu SME Center has successfully concluded the first edition of its Hackathon Series, a quarterly series in partnership with the private sector to bring the ideas of the teeming youth of Enugu State to the limelight.

The first series of the initiative, which started with online registration on July 7, 2020, with focus on project themes around agriculture, education, healthcare, small business tools and other use cases & services, brought together over 300 teams, which was screened down to 25 considered disruptive and later to Top 10 marked marketable.

However, at the final stage of the challenge, which held at Hotel Sunshine, Enugu on September 11, 2020, the top 10 projects were further pruned to top 3 by the judges, which included members from public and senior private sector executives from School of Enterprise Development, Lagos Business School, and Geneysis Tech Hub.

The top three projects include; Creation Energy, a project that converts cassava waste to electricity; Teen Coding Hub, which teaches kids and teens how to code and Green Axis/Cosmos Automation, which recycles waste into raw materials for manufacturing firms/ an automated irrigation system.

At the end of the day, Creation Energy emerged the overall winner, while Teen Coding Hub and Green Axis/Cosmos Automation emerged first and second runners up respectively.

Explaining the criteria for choosing the top three projects and the overall winner, the judges noted that the three first-class ideas, which have proven marketable and implementable concepts with investment potential were selected after the extensive pitching and judging process by the finalist and the judges respectfully.

According to the judges, the top three ideas were all winners because of the potential of their projects, especially at offering solutions to problems.

The Top 3 would receive cash prizes, with the winner getting a US$3,500Business Support Grant from the Enugu SME Center and its private sector partners that would include (but not limited) to mentorship, business advisory, product development, technical support, media publicity, digital marketing support, financial advisory services.

Moreover, all the Top-10 finalists would be enlisted in the Tekedia Mini-MBA Program.

Riding on the success of the first edition, the Enugu SME Center is planning the 2ndedition of the series by December 2020 with a focus on financial services innovation.

The Enugu SME Hackathon Series is organised by the Enugu SME Center with focus on finding solutions to addressing the changes to the ways of life and business as a result of Covid-19 and the institutional change it has created in the global ecosystem.

Most importantly, the series is in line with the developmental and youth empowerment vision of Ifeanyi Ugwuanyi, governor of Enugu State, who birthed a vision of the state becoming the economic epicentre of South-Eastern Nigeria.

Meanwhile, His Excellency, Rt. HON. Ifeanyi Ugwuanyi (GburuGburu) further stated that the economic epicentre vision of his administration is further boosted by the state’s enviable ranking as 2nd State in Ease of Starting Business and 3rd State in Ease of Doing Business in Nigeria in the 2018 World Bank Ease of Doing Business sub-national ranking, which has made corporates and businesses flocking the state to establish their presence.

His Excellency, Rt. Hon. Ifeanyi Ugwuanyi is desirous of lifting families from poverty by creating many employment opportunities, is committed to supporting the Hackathon Series because of its avowed ability to harness the untapped potentials of the state’s teeming youth and Enugu people at large.

In furtherance of his commitment to the empowerment of Enugu youths and the people, the governor has relentlessly supported the Enugu SME Center, the organisers of the Hackathon Series.

Speaking on the rationale for the Hackathon Series, Arinze Chilo-Offiah, Special Adviser on SME Development & Investment Promotion/ Head, Enugu SME Center, noted that with the Covid-19 pandemic changing the way people live their lives and how they conduct business, people need solutions to address the changes, hence bringing innovative minds to offer solutions at the Enugu SME Hackathon Series.

Meanwhile, Chilo-Offiah is satisfied with the huge participation and the quality of projects that the innovative minds unveiled in the first edition of the series while hoping for more innovations in the second edition, which comes up this December. 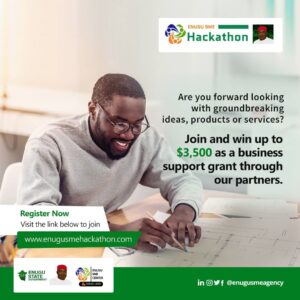