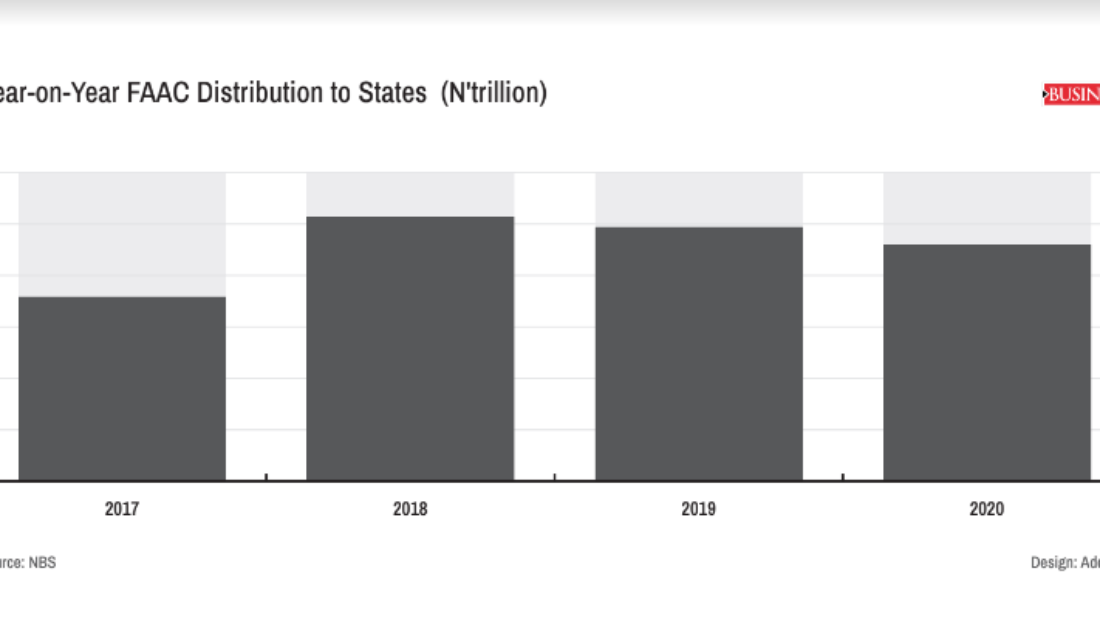 Nigeria’s Federal Accounts Allocation Committee (FAAC) has doled out in excess of N9.13 trillion to states in the past four years, BusinessDay can disclose. Year-on-year (yoy) FAAC distribution data obtained from the National Bureau of Statistics (NBS) also disclosed three South-South states – Delta, Akwa Ibom and Rivers as recipients of the larger portion of the ‘Abuja’ money doled out to the 36 states and FCT.

Ironically, most Nigerian states depend primarily on monthly receipts from the FAAC to fund their budgets. Despite the record FAAC distribution in four years, some state governments are still unable to fund worker’s salaries, particularly those that claim they get lean FAAC and Internally Generated Revenue (IGR).

Many Nigerian states need to further embrace transparent reforms by expanding monitoring and reporting of all public spending as well as ensuring easy public access to spending data.

The COVID-19 pandemic has placed Nigeria at a critical juncture – as the country entered the crisis with falling per capita income, high inflation and governance challenges. Policy adjustment and reforms designed to shift the country from its dependence on oil and to diversify the economy toward private sector-led growth will set Nigeria on a more sustainable path to recovery.

The Nigerian economy exited recession in the fourth quarter (Q4) of 2020 with a modest 0.11 percent growth. Earlier this week, the International Monetary Fund (IMF) revised upward its growth forecast for the Nigerian economy in 2021 to 2.5 percent from its earlier projection of 1.5 percent it announced in January. The IMF announced the new projection in its World Economic Outlook update released on Tuesday.

The new growth projection is 1 percent higher than the multilateral institution’s 2021 forecast in January. January’s forecast was a downward review from the forecast it shared in October 2020.

“Nigeria has one of the lowest revenue levels as a share of GDP worldwide. A large share of revenues is spent on the country’s public debt service payments, leaving insufficient fiscal space for critical social and infrastructure spending and to cushion an economic downturn. In this context, mobilising revenues through efficiency-enhancing and progressive measures is a top near-term priority.

“Revisiting tax exemptions and customs duty waivers, increasing and broadening the base for excise taxes, developing a high-integrity taxpayer register, enhancing digital infrastructure, and improving on-time filing and payment are important measures,” IMF had said in its “Five Questions About Nigeria’s Road to Recovery.”

The Fund had noted that once economic recovery takes root, Nigeria will need to increase the value-added tax rate to at least 10 percent by 2022 and 15 percent by 2025 — “the average in countries belonging to the Economic Community of West African States (ECOWAS) — to create effective fiscal space.”

In 2020, the FAAC disbursed N2.49 trillion to the Federal Government of Nigeria while states received a total of N2.30 trillion within the period under review.