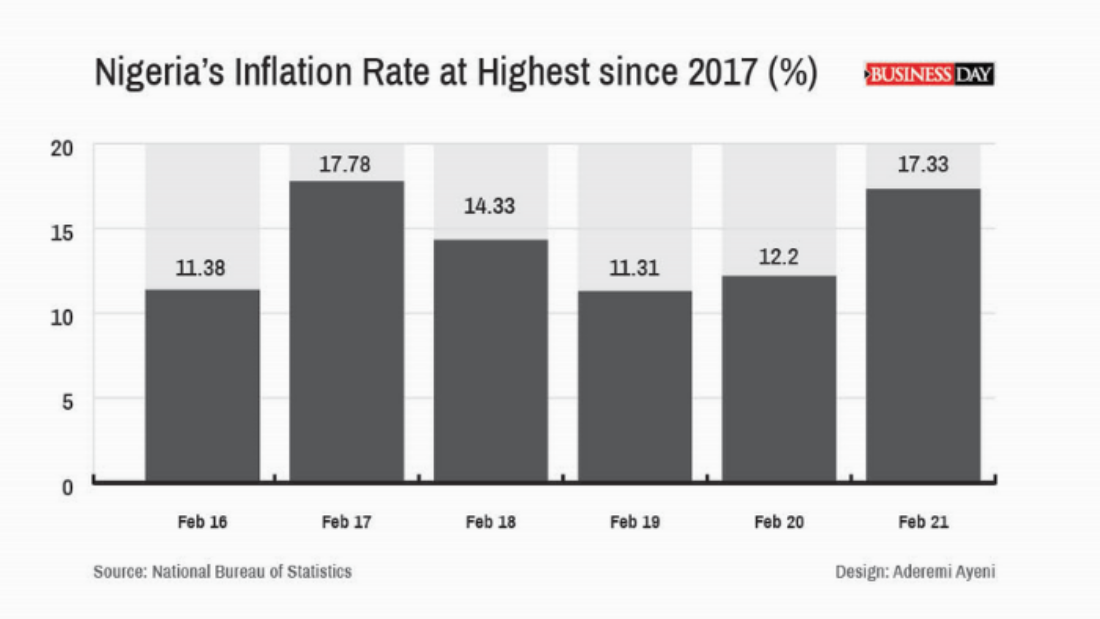 Headline inflation rate jumped to a four-year high at 17.33 percent in February, from 16.47 percent in January 2021, according to a report released by the National Bureau of Statistics.

Nigerians cannot afford to buy as much as they used to as food costs continue to surge, aggravating the pains already inflicted by the pandemic and economic slowdown.

Headline inflation rate jumped to a four-year high at 17.33 percent in February, from 16.47 percent in January 2021, according to a report released by the National Bureau of Statistics. On year-on-year basis, this is the highest since February 2017.

This signals a decline in purchasing power of Nigerians as prices of goods and services are skyrocketing without a corresponding increase in income, making life miserable for the country’s population.

“The increase is obviously as a result of a surge in food cost which mainly comprises of imported food,” Ayodeji Ebo, Head Retail Investment, Chapel Hill Denham, points out.

Food inflation rose by 21.8 percent month-on-month in February compared to 20.57 percent in January 2021.

“This means we still import a lot indicating that there are opportunities to produce more, generate employment and reduce demand for foreign goods which keeps prices increasing,” Ebo said.

The increased importation is also pointer to Nigeria’s failed border closure policy which kicked off as a strategy to boost local production.

The situation of Nigerians is worsened by the 23 million without jobs and another 15.9 million worked less than 40 hours a week, making them underemployed, according to the NBS.

To put in perspective, Nigeria’s total number of jobless people is equal to the entire population of Niger.

Nigeria’s Per Capita GDP which has been contracting for six straight years also gives a dim picture of untold hardship facing many businesses and household.

By Businessday’s analysis, Nigeria recorded Per Capita GDP growth of -4.57 percent in 2020, its worst contraction in more than six years.

In basic interpretation, this means an average Nigeria has a lower standard of living in 2020 than in the past six years.

A 2018 report by the Brookings Institution situated the country as the poverty capital of the world with 87 million people or roughly 40 percent of Nigeria’s 200 million populations living below $1.9 a day.

As a result of the pandemic, another 15 to 20 million Nigerians will be dragged into poverty by 2022, the World Bank estimates.

Analysts say Nigeria will continue to see an upward trend in the inflation rate in the coming months if certain factors persist.

There have been a number violent farm attacks, and clashes between herders and farmers in recent times and this would continue to weigh on food supply.

Also, inflationary pressures will also mount if the price of petrol rises higher.

The Petroleum Products Pricing Regulatory Agency (PPPRA) announced a new price template that put the retail price for the product at between N209.61 and N212.61. However, the agency has since retracted the statement while the NNPC has reiterated that there would no price increase in March.