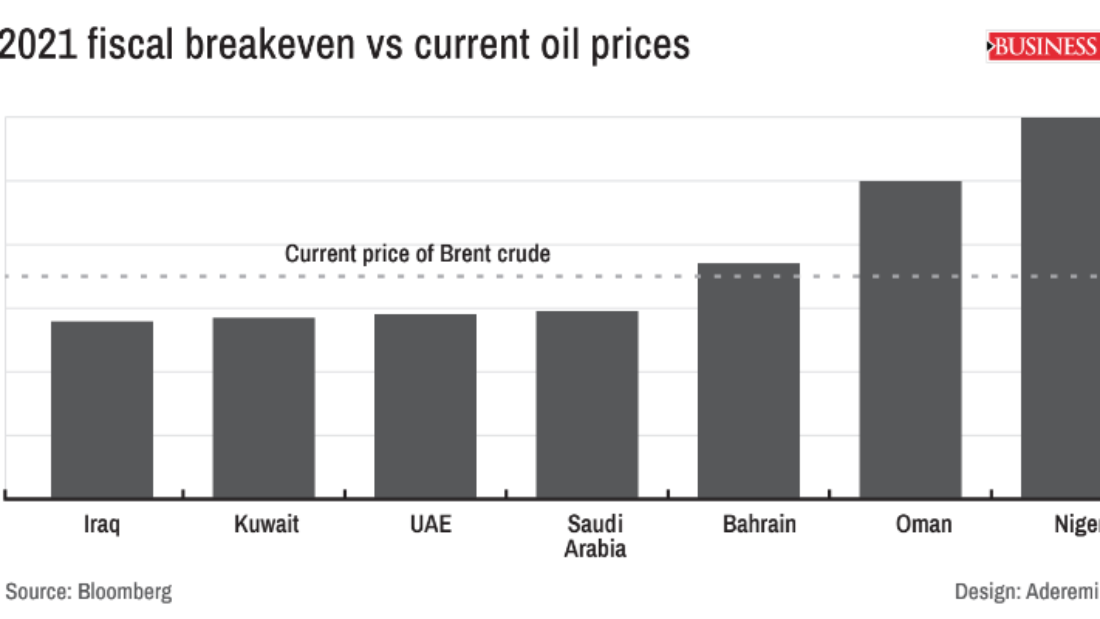 Bullish crude oil price since the beginning of the year have raised hope of a better global fiscal performance after severe disruptions caused by COVID-19 pandemic that unsettled oil-dependent economies.

The price rise of more than 75 percent since November 2020 has been on account of major economies reopening and vaccinating their populations after the pandemic shut down factories and grounded the aviation industry in March 2020.

But with the positive sentiments associated with rise in oil price, celebration from the Nigerian economy, sadly, comes off as premature as the country’s fiscal position still remains precarious.

Analysis shows that as of today, Nigeria’s economy can attain fiscal break-even position only if oil prices climb as high as $103 per barrel.

This was attained by incorporating the current official exchange rate at N380/$1, Federal Retained Oil Revenue to Gross Oil Revenue at 37 percent, Average Daily Production of 1.7 million barrels per day (OPEC quota), the current budgeted expenditure as well as budgeted Non-Oil + Other Revenue and Unfunded Revenue at N4.6 billion and N8.9 billion, respectively.

Over the years, the Federal Government has struggled to finance its budget mainly due to low revenues, which have been susceptible to oil price volatilities.

At year-end 2020, the Federal Government’s retained revenue was N3.94 trillion, indicating 73 percent of target of the revised N10.805 trillion 2020 budget, which reflected the effects of the COVID-19 pandemic.

This has resulted in an increasing budget deficit for the country and an increased borrowing culture by the government from both domestic and international sources.

Figures from the Debt Management Office (DMO) indicate that Nigeria’s total public debt as of December 31, 2020, was N32.915 trillion, including those for Federal and State Governments, as well as, the Federal Capital Territory. Debt stock is further projected to hit N38.68 trillion by December 2021, according to Zainab Ahmed, minister of finance, budget and national planning.

The Federal Government projects overall budget deficit to stand at N5.60 trillion for the year 2021, representing 3.93 percent of GDP.

With the planned borrowing of N4.69 trillion to finance the budget deficit, total public debt is expected to rise to N36.89 trillion by December 31, 2021.